Welcome to the Kugeln.io wiki. It is great to have you join our team as a contributor.

We need your help cleaning up our wiki. Contribute now to help us!

Here you can edit and add things about the game, talk with another players and learn more about Kugeln.io. Let's start!

Kugeln.io is a GeErman online shooting game where the characters are Polandballs (also known as Countryballs). In Kugeln.io you need to kill all other players (or just your team rivals).

For getting levels, XP, friends, and other stuff (see Accounts) you'll have to connect to your Facebook or Google account.

The Skins are all the current countries, territories and some other entities (and some of them are locked and need levels) as well as free and locked accessories like helmets and eyewear.

Have a good game and have fun! :D

The countryballs are geopolitical memes created on the later mid-2008. They consist of countries represented as their flag in balls (most of them). They were created on the /int/ section of the imageboard krautchan.net.

If you want to learn more about these clay, go here --> https://polandball.fandom.com/wiki/ 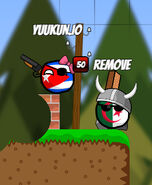 2 players on the Spring map

Photo of spring map
Add a photo to this gallery

So this is where some kugeln.io players go when they are not playing kugeln.io or any other game!

Reporting Issues with the Game

To report issues with the game (such as players not being able to access a main match, hackers, or a server shut down), use this link: Game Issues Note Page. This page is created to report and bring attention to issues, primarily issues that potentially affect multiple players. Before creating an issue report, copy the proper format (format posted on the page) and then fill in information.

Retrieved from "https://kugelnio.fandom.com/wiki/Kugeln.io_Wiki?oldid=34419"
Community content is available under CC-BY-SA unless otherwise noted.